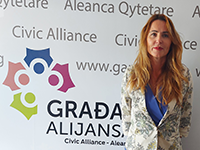 Vera Popadić was born and raised in Podgorica. She graduated from the Faculty of Law of the University of Montenegro. As a student, she participated in the fight for women’s rights, mostly in order to emancipate feminism from socialist ideology. She continued to engage in social activism as a member of the student association “Bona fides” from Podgorica.

She started her legal career in 1998 in “Titex” company and started a family at the end of the same year. Her next engagement was with the company “Tehpro-sistemi”, where she contributed to record turnover as an executive director.

In 2008, Vera decided to change her career path and moved with to Herceg Novi. She became the owner and executive director of the “Paradiso” franchise. After 13 years of successful business, she is now returning to her roots and legal science.

In mid-September 2022, she joined the Civic Alliance team as a legal advisor. Vera has always perceived the fight for civil and human rights as one of the most important social issues, and now she has an opportunity to apply her work experience in the best way possible.

She is a booklover. When not spending time with her family, Vera enjoys leisurely walks along the Herceg Novi promenade.