The Convention on Human Rights was signed on November 4, 1950 and represents the beginning of standardization on European soil. This signing marked the acceptance of the obligations to respect rights and freedoms, as well as recognition of jurisdiction of the European Court of Human Rights.

70 years later, we celebrate this essential event, which paved the way for the respect and application of human rights for all citizens of Europe. To that end, Civic Alliance organized a series of activities aimed at promoting the Convention, as well as reminding the authorities and the public of the importance of its respect and implementation.

Through several media appearances, we talked about the Convention, which was an opportunity to remind all relevant state institutions of the rule of law in Montenegro. We can clearly conclude from the report of the European Commission that Montenegro has made limited progress in the field of application of the rule of law and that there is still much room for improvement in this area. 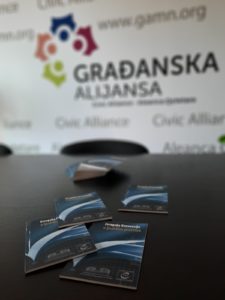 In cooperation with the Council of Europe, we distributed pocket conventions on human rights to all members of the Parliament of Montenegro. As part of their decisions from the parliamentary benches, which affect the lives of all Montenegrin citizens, it will be useful to have such a document at hand, which they can consult or remember its articles at any time.

On the day of the 70th anniversary of the Convention, we organized a visit to the Information and Documentation Center attended by Ms Lidija Vukčević – Prosecutor at the Special State Prosecution Office, Ms Nerma Dobardžić – Deputy Protector of Human Rights and Freedoms, Edin Koljenović – Head of the Office for Regional Youth Cooperation (RYCO) in Montenegro and Rifat Fejzić – Chief Mufti (Reis) of the Islamic Community in Montenegro. This event was organized in the premises of the Information and Documentation Center, which was founded by the Youth Initiative for Human Rights, member of the Civic Alliance. The Center deals with collecting and documenting material related to war crimes committed during the 1990s in our area. This was an opportunity to, in addition to marking the anniversary of the Convention, present to the attendees its main activities and significance is in terms of dealing with the past and reconciliation both in the country and in the region. All the present congratulated on the opening of the Center, emphasizing its importance.

The conference organized by the Council of Europe at the Faculty of Law of Montenegro under the name ” Marking 70th Anniversary of the European Convention of Human Rights” was attended by the Civic Alliance. In behalf of CA a lecture was given by the lawyer Dalibor Kavarić named “Decisions of the ECtHR in relation to Montenegro – summary”. Participants were able to follow the conference online.