NECESSARY REVIVAL OF THE REAL FIGHT AGAINST FASCISM

On each November 9, there are fewer people who pay attention to the more and more formal and sterile statements about the International Day Against Fascism and Antisemitism, which is, by chance, celebrated today. This is not incomprehensible, having in mind how wrongly we have talked about fascism, reducing it to the revival of zombies from the Second World War, who are only remembered by their direct descendants, budget patriots and passionate revisionist quasi-historians. Simultaneously, we have ignored the essential problems – social processes that promoted fascist postulates – from authoritarian state tendencies, through intolerance of diversity to religious and national exclusivity. This was a key problem for Montenegrin society until the previous elections – that the civic alternative was silent in its hypocrisy and opportunism, avoiding to oppose those who created the cult of the state, behind which was a discriminatory and unjust political-economic system, but also those who created national cults, behind which hid hatred and organization of society according to religious dogmas and nationalist frustrations.

Therefore, on this day, we need to remind ourselves about July 13 anti-fascist tradition and look at those social forces and individuals who want to impair this anti-fascist legacy – whether by infantile proposals to merge the Greens and Partisans, or by dangerous proposals to legitimize the Chetniks and ignore Partisan tradition. Let us not forget – such a correction of the past has only one purpose – to enable legitimation of the values that these nationalist projects symbolically represent and establishment of systemic mechanisms necessary for their maintenance. 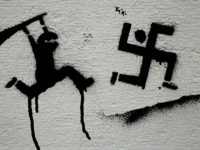 This exactly is one of the key topics for the new government. For, what is the purpose of a more efficient, just and quality government, than to enable the realization of social values and priorities? Such a government is not a goal in itself, but a means to achieve this goal – a society of democratic and anti-fascist values. This is why it is necessary to offer citizens very clear beliefs that the values that the new government will serve will not have anything to do with the demons that have haunted Montenegrin society for the past 30 years. On the contrary – the new Governemnt needs to show that they will directly oppose them; much better and more persistently than the previous government wanted and could. This primarily means eliminating all systemic inequalities, from the positions of anti-fascist heritage, secularism and anti-discrimination.