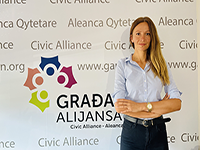 Ana Kankaraš was born in Podgorica. She graduated from the Faculty of Translation, English and Russian language module, at the Institute of Foreign Languages of the University of Montenegro. She has been engaged in translation and interpreting for a decade and a half.

She started her career at the Aluminum Plant Podgorica (KAP), where she translated and interpreted from Russian into English and vice versa. After that, she joined the civil sector – NGO Human Rights Action, where she worked as a translator and project coordinator in areas that included freedom of expression, rights of persons in closed institutions, LGBT rights, children’s rights, war crimes, judicial reform, etc.

In 2014, Ana moved with her family to Bar, where she joined the property development business in terms of permanent employment, although she still worked part-time as a translator. She held the positions of sales manager and then sales director, and her duties and responsibilities included analyzing trends in the real estate market, forming and implementing sales strategies, determining sales prices by monitoring competition and demand, identifying new markets, organizing and holding project presentations abroad (Luxembourg, Chicago, New York, Istanbul, Kiev), etc.

Family obligations then took her to Budva, where she stayed for two years, and in 2021 back to Podgorica. In June the following year, she started her engagement in the Civic Alliance as an interpreter for the Russian language, in connection with the provision of free legal aid to asylum seekers. Given her strong sense of justice and fairness from an early age, Ana’s involvement in an organization such as the Civic Alliance, which advocates for human rights and values such as justice, tolerance, peace and equality, brings her a sense of satisfaction and fulfillment.

In her free time, she practices yoga, drawing and dancing, and enjoys discovering new cultures and cuisines.

She is married to Ranko.