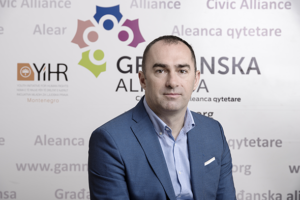 Milan Radović was born in Mojkovac. He graduated from the Faculty of Philosophy in Nikšić and until 2007 he taught sociology in high school. After that, he started his engagement in the Youth Initiative for Human Rights as a researcher and project coordinator. He monitored and documented human rights violations in Montenegro in various fields, including politically motivated violence, attacks on journalists, torture by police and prison officials, the right to a fair trial, freedom of expression, hate speech, religious freedoms, minority rights, etc. His involvement in this organization also included working on free legal aid projects and working with citizens.

Since 2012, he has been engaged in the Civic Alliance as the coordinator of human rights programs, and later, from 2019, as the program director. He coordinated several regional projects in the field of human and minority rights, and was a member of working groups for drafting legislation in the field of human rights, specifically working groups of the Ministry of Human and Minority Rights in connection with amendments to the Law on Prohibition of Discrimination, Law on Minority Rights and Freedoms and Law on the Protector of Human Rights and Freedoms.

He was a national consultant to the Council of Europe on the projects “Enhancing Human Rights Protection for Detained and Sentenced People in Montenegro”, “Promotion of Human Rights and Minorities Protection in Southeast Europe” and the ROMACTED program. He was engaged as a national consultant for Montenegro in the regional project Civil Monitoring of the Regional Housing Program with a Special Emphasis on Care for Roma Population, and as a coordinator of the project “United Support for Roma Inclusion”.

Milan is the co-author of several reports on the judiciary and minority rights and the author of several annual reports on the human rights in Montenegro. He was a researcher and coordinated reporting under the Universal Periodic Review (UPR) of human rights. He was a member of the Radio and Television of Montenegro Council and is currently a member of the Council of the Agency for Electronic Media of Montenegro.

As a human rights expert, he manages projects related to dealing with the past, media freedom, as well as human and minority rights. He works with young political leaders, journalists and NGO activists on human rights education through the School of Political Studies, where he has been the president since 2022.

Milan is a fan of the Montenegrin national football team. He likes to spend his free time in the mountains.
He is married to Marija, with whom he has daughters Mia and Matea and son Maksim.