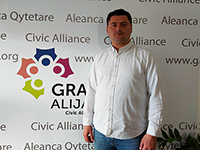 Pavle Ćupić was born in Cetinje. He finished elementary school in Podgorica, high school in Danilovgrad, and the Faculty of Law in Podgorica. He passed the exam for work in state bodies.

During 2006 and 2007, he covered several positions in the tourism sector in the area of personnel management. From 2008 to 2018, he worked as a program assistant for monitoring and analytics in the “Network for the Affirmation of the Non-Governmental Sector – MANS”, where he was in charge of implementing various monitoring and analytics activities related, inter alia, to the Parliament of Montenegro. He was a key person in MANS for lobbying and similar activities in the Parliament, as well as for communication with MPs and the parliamentary administration. He attended numerous sessions of parliamentary working bodies and plenary sessions, and was in charge of providing support from MPs in various situations. He participated in the drafting of several laws, by-laws and amendments. He was responsible for the analysis of final court judgments in the field of corruption and organized crime, analysis of the work of judges and prosecutors, as well as other legal procedures. Among other things, he was in charge of monitoring the electoral process in Montenegro, as well as monitoring of the financing of political parties.

From 2018 to 2020, Pavle worked as a manager in the tourist agency “Montenegro tourist service”, and from 2020 to 2021, he held the position of executive director in the company “Buena Vista Habano”.

Since 2021, he has been employed at the NGO Civil Alliance as a legal advisor in charge of providing free legal assistance to asylum seekers and persons granted international protection. He also represents asylum seekers during their hearings before the Directorate for Asylum. In addition, he is in charge of monitoring the process of access to rights, i.e. the exercise of all rights prescribed by the law, which includes drafting of written forms and documents for users and their referral to competent authorities. His job description also includes writing claims and appeals against decisions of the Directorate for Asylum to be submitted to the Administrative Court. As a representative of the Civic Alliance, he participates in the work of the Committee for Human Rights and Freedoms of the Montenegrin Parliament. He monitors detention facilities and respect for the rights of persons deprived of liberty. He participated in the work of the UN Committee against Torture at the 73rd session, where he presented the state of human rights in Montenegro and the level of compliance with the Torture Convention. He monitors the work of the Judicial Council and participates in all activities of the organization related to the promotion and protection of human rights and freedoms. He is a member of the working group for chapter 24 – Justice, freedom and security.

Pavle is an alumni of the School of Democratic Leadership. He attended the School of Peace and Dialogue (Nansen Center for Peace and Dialogue) and on that occasion visited the Parliament of Norway, Government of Norway, their Trade Union, political parties and other relevant institutions in Oslo and Lillehammer. He completed a training on law-writing techniques organized by the Montenegrin Human Resources Administration, as well as training in the field of budget monitoring organized by Transparency International from Belgrade. He participated in a large number of conferences and round tables dedicated to the competences of the Parliament of Montenegro, as well as a large number of round tables dedicated to the fight against corruption and respect for human rights.

He is the co-author and author of a number of reports in the field of human rights protection, the work of courts and treatment of justice institutions towards citizens, fight against corruption, election campaigns, the transparency of the spending of Montenegrin citizens’ money, as well as reports dedicated to the work of the Parliament of Montenegro and its working bodies.

He is married to Sanja, with whom he has daughter Maša.