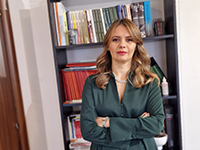 Amina Murić is from Rožaje, and has been living and working in Podgorica since 2009. She graduated from the Faculty of Philosophy in Nikšić, Department of English Language and Literature in 2008. She is currently attending master’s studies in Podgorica. Her first job was at the Railway Transport of Montenegro JSC, where she worked since 2009 as a translator, associate and assistant on international projects for 8 years. For the last two years she worked as a PR manager and was in charge of the company’s public relations, press releases, internal communication, appearance and presentation of the company’s website, and also monitored media reports, achieving exceptional cooperation with the media.

In the period from 2019 to 2021, she was hired as an assistant in the Business English course in the first, second and third year studies at the Faculty of Tourism of the Mediterranean University.

Since 2019, she has been employed at the NGO Youth Initiative for Human Rights in the position of deputy executive director, where she coordinates business activities, deals with public relations and the implementation of media projects.

She is the coordinator of numerous projects concerning the protection of human rights, more specifically, the rights of minorities, women, Roma, LGBT persons, the elderly, and persons with disabilities. She actively fights hate speech and discrimination both online and in the physical world, and deals with issues of ethnic distance.

She is a member of the RTCG Council from among human rights NGOs, where she participates in the development of a strategy aimed at improving the public service as well as the media scene in Montenegro, media freedom, media professionalism, safety of journalists, and media literacy.

She coordinated projects related to ethical media reporting, issues of media professionalism and respect for standards, especially in relation to marginalized social groups in Montenegro.

She worked on issues of dealing with the past and transitional justice within project “No impunity for the past!”, whose primary goal is to research and document war crimes in Montenegro in the 1990s. Also, she worked on the development of promotional media campaigns about the war crimes that took place in Montenegro and the region with the aim of informing the general public about these facts, and highlighting the importance of reconciliation in Montenegro and the region.

She was engaged for several years as the chairperson of the Commission for selecting the best journalistic stories on projects related to the promotion of Roma culture and language.

She is a lecturer at the School of Political Studies seminars on media freedom, respect for ethical and professional standards. The School of Political Studies was founded in 2002 with the mission of further education of active and future political decision-makers, recognized agents of social change and creators of public opinion, potential and effective initiators of positive social processes and reforms.

She is the editor of several annual reports of the Civic Alliance, and is also part of the team that worked on the creation of Civic Alliance publications, such as “Groundedness of minority population in Montenegro”, “Culture, customs and language of national communities in Montenegro”, “COVID-19 testing – A look at the epidemic”, “12 sides for progress – an overview of priority activities in the areas of justice and human rights”, “Guide to Article 5 of the European Convention on Human Rights”, “The rule of law in the era of the corona virus epidemic”, “Analysis of the decision on the restriction of freedom of movement”.